With yet another day off from school due to weather, I found time for a timeless parenting tradition: struggling to put together one of Grace’s new toys. I believe this is a tradition that grandparents and other parents find very amusing and new parents do not. 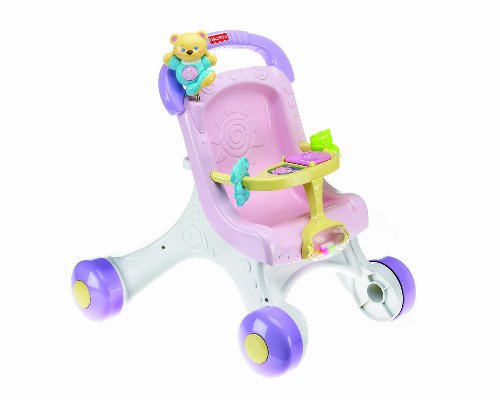 In any case, putting together the adorable stroller that Grace received from Heather for the holidays proved to be a classic case of  the above. In the box, the stroller looked like a very simple toy to assemble. The finished picture seemed to have few parts that would need assembling.  See picture at left.

So, with Grace approaching a crabby time, I began said toy assembly. I first attempted to interest Grace in the box while I worked on the assembly. Usually, boxes are a wonderful toy to her, but not today. Today, she wanted to inspect all of the stroller pieces. This meant that just as I read the directions and located the next piece to assemble, Grace chose that piece to wave around, chew on, bang on the floor, etc. As we all know, taking a “toy” away from an 8-month old does not end well. This became a constant battle throughout the half-hour assembly process. When she wasn’t wanting the necessary pieces, Grace was scrambling to snatch the screw-driver I was using to assemble the stroller. Re-read above if you are wondering how taking away the screwdriver went… The icing on the cake to the entire process was when the “simple snap-on” piece refused to “snap”. When it finally snapped, it also “snapped” my finger, leaving me with a blood blister. My own battle scar from the toy assembling process!

With all said and done, I will say the stroller is adorable and Grace instantly wanted to stand behind it. Guess those parental battles are all worth it!

Celebrating One Month with Grace!

The next great Olympian?